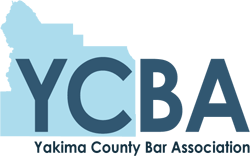 1865     The Territorial Assembly Act of January 21, 1865 created Yakima County by carving from Ferguson County roughly what is now Kittitas, Yakima, and Benton Counties.

1882     The courthouse and all records of the Territorial District Court at Yakima City were destroyed by fire on March 31, 1882.

1886     On January 9, 1886, the Territorial Assembly changed the County Seat from Yakima City to North Yakima (present day Yakima) and made provision for the removal of the courthouse to North Yakima.

1918     The Yakima Law Library is incorporated on January 17th.  Members of the local bar buy shares in the library.  For many years the law library is located in the now demolished Miller Building on the northeast corner of 2nd Street and Yakima Avenue.

1923 The Annual Bar Association picnic is held on April 21st at Soda Springs on Ahtanum Creek.  Fifty Yakima attorneys, judges, and other members of the bar enjoy a beefsteak and corned beef and cabbage “dinner” at noon followed by a game of baseball. The date of the first picnic is not known; however, it predates the Annual Christmas Party and is now the longest running social event.

1923     The First Annual Christmas Party is held on December 22nd at the Elks Temple.  The party was held at noon with turkey and trimmings provided. Music was provided by a male quartet compose of Judges A.W. Hawkins and Harold Gilbert, and attorneys Fred Fontaine and Guy Shumate.  Also, featured as part of the program was a mock trial with Deputy Prosecuting Attorney G.A. Conklin in the role of “a woman and the dressed the part, charged with murder in the first degree for shooting her husband.”

1941     The Yakima County Commissioners purchase the Yakima Law Library for a sum of $8,100. The law library eventually is moved to its present location in the basement of the County Courthouse.

1959     The Yakima County Bar Auxiliary, an organization for wives of Yakima County Bar Association members, is organized on April 17th, with the stated purpose being to “. . . assist the Yakima County Bar Association in the furtherance of its objectives; and promote social contact and cultivate friendly relations between lawyers’ families and communities . . .” Mrs. John S. Moore is elected its first President. A scrapbook of the Bar Auxiliary activities is maintained at the Law Library with the last entry being made in 1984. The organizations appears to have ceased regular activity sometime thereafter.

1965     V.O. Nichoson, a former Superior Court judge, wrote the “History of the Bench and Bar of Yakima County.” Copies of which can be viewed at the Yakima Library. Nichoson notes, that on Wednesday of each week, members gather for a noonday luncheon and on the social side is the annual Christmas party and Spring Picnic.

1987     A Reception and Dinner Honoring past YCBA Presidents and Fifty Year Members is held May 27th at the Red Lion Motor Inn (formerly the Thunderbird).  The featured speaker is State Supreme Court Justice Robert B. Brachtenbach.

2013     The 90th Annual Christmas Party is held at the Yakima Valley Museum.